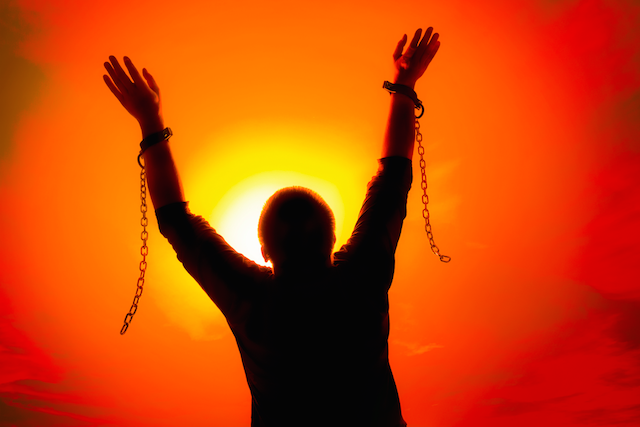 “Mindfulness means paying attention in a particular way: on purpose, in the present moment, and non-judgmentally.” ~Jon Kabat-Zinn

I met Damon as one of about twenty ex-cons on a hiking expedition up Pike’s Peak. Like the others, he was kind of free, kind of not, released on good behavior to the halfway house and rehab center at which I was interning.

Damon had very recently tasted freedom after many years in the clink, and he was an extremely severe and intimidating individual. A man of very few words, 220 pounds of solid, athletic muscle, and eyes as cold as ice. I couldn’t imagine too many worlds in which he’d really fit. Despite his callous nature, in the few moments we shared atop Pike’s Peak he became my unlikely teacher.

Damon told me that while he’d been in prison he spent approximately three years of seven in solitary confinement. In the heat of passion a barbell to another inmate’s skull earned him that severe punishment. He told me that for those three years in the hole he had only two books to keep him company, the Bible and the Koran, both of which he read cover to cover dozens of times.

That’s a long time to have with the ‘holy’ scriptures I acknowledged. So I asked Damon what he thought about them. “After all that time, did you find any connection to those books? The spirituality they speak of?”

Damon explained, as we looked out over the vast planes and neighboring Colorado Springs, that there was something more to life, more than what we see. But it isn’t in those books. The day he was released from prison he went to visit a relative in the hospital. While there he heard the cry of a newborn, a sound so committed, powerful, and pure that it brought him to tears.

“It was the most beautiful thing I’d ever heard,” he said.

I sat there in awe of this seemingly hardened man, this man whose senses were deprived for years in the hole—no conversation, no music, no change of scenery, temperature, or taste. Everything he knew himself to be beforehand must have dissolved within those walls. But they made space for something new.

This hardened yet highly sensitive man tasted the divine while hearing something that most of us either try to avoid or take as a sign of something being wrong—the wail of a crying newborn. In that meditative moment Damon tasted pure life.

I believe this highlights the biggest hurdle in unburdening the mind, reducing stress, conquering self-doubt, and tasting the richness of life—namely, an inability to be fully present without judging one’s immediate experience.

All too often we carry the burdens of yesterday forward into today. We carry beliefs and associated emotions from the past into this present moment. And we miss actual, novel experiences right before us. We fail to connect with those who are important to us. We fail to see the beauty in the wail of a newborn and hear instead…noise.

After decades of practice I still struggle to be where I am without judgment. In a discussion with my partner just last night I fell into the same old trap—I failed to see and consider her needs in that moment and instead saw the situation as yet another repeat of a prior conversation, albeit one with lingering emotional attachment. And surprise, surprise, we weren’t any more connected to one another after the conversation than we were before it. Moments like this aren’t always glamorous or pivotal insights, but they do reveal the symptoms for which meditation is the cure.

Prior to my conversation with Damon I approached the practice of meditation, like so many others, as something external to the basic things of daily life. It belonged in a quiet, natural setting. It was accompanied by an austere, formal tone. It was altogether different from tense moments and those copious, habitual activities that marked most of my days—the morning coffee, quick meals and conversations, the drive to and from work. It was often the practice that helped regulate, if not override, the stress and negativity accumulated throughout the day.

But meditation isn’t a practice external to everyday activities. In application, it’s a practice that speaks to the quality of your experience with them. For there is the practice of meditation, which is often enhanced by natural, peaceful environments. And then there’s the application, the living connection that occurs within a meditative moment—the one lacking with my partner last night. This is fundamentally non-formulaic, non-judgmental awareness that only lasts for mere moments. But they’re awesome mere moments.

In all moments we can choose to react and operate from a state of preconditioned, habitual thought, or we can choose to breathe, to relax, and to see the novelty and beauty in this very moment.

This insight made clear to me both how important meditation truly is in living a passion-filled life, as well as how much conscious effort it requires. I realized it isn’t just a thing you do apart from daily life as and when you can, but its something you can do within every part of daily life, should you so choose.

Damon, who had never formally meditated, accessed and learned to apply the meditative mind after years of solitary confinement. Without pretense or dogma, he was my living example that nirvana is samsara—that the mundane can be divine. And while solitude is conducive to stillness, if one’s practice never integrates with the mundane ‘stuff’ of life, then we’re missing the whole point. Meditation is life.

What a Felon Taught Me About Living Life Fully November 27th, 2018coachfelix