Name
HOME
Top Menu
I Used to Be Hungry All the Time March 11th, 2020coachfelix 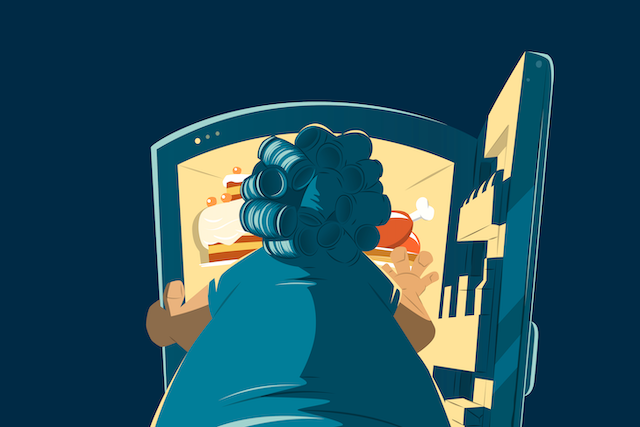 I mean, hungry allll the time. Basically, if I was awake, I was ready to eat.

I’d mindlessly pick at whatever was available.

I’d wander the kitchen feeling “snacky” all the time.

I’d be completely consumed with thoughts of what I was going to eat next from the minute I woke up til the minute I went to bed. And behind all the desires to eat were always the arguments—what I wanted to eat versus what I thought I was “supposed” to eat.

No matter how much I had just eaten, I could literally always still eat. I lived in a constant state of fear of putting on more weight and felt guilty and horrible about myself for all of it.

“No thanks, I’m not hungry” wasn’t a sentence that existed in my vocabulary.

(An interesting point to make here, and something for you to think about in your own history with food and dieting, is that I was never like that until I started dieting. The harder I tried to restrict certain foods, the worse it seemed to get, but I digress…)

Dieting and food rules were a big part of the cause, but they weren’t the only cause.

That was the problem, I thought. The solution then, of course, was to just try keep trying to “be good.” I had to want it more, shame myself more, and try harder to stop eating things I shouldn’t eat.

I thought the way I felt about my body (hatred, of course) was my fault because I was too much of a pig to stop eating and I kept making myself fatter and fatter (I thought).

I knew there were things in my past that could have been considered “issues” I’d never dealt with, but as far as I was concerned, they were in the past. I was over them. Besides, I was strong and nothing bothered me (I thought).

That’s what I honestly believed.

But wow, was I wrong.

Here’s what I’ve learned in the years since I’ve “awakened” (as they say) to the truth.

First, our thoughts are not our truth, but if we repeat the same ones to ourselves for long enough, we believe them to be true.

What stories are you running on autoplay in your head everyday about yourself, about food, about your body, about food?

Second, our thoughts are only the surface level chattering of a very complex computer, and that computer is constantly running (mostly) unconscious programs in the background, all day, every day.

Beneath those thoughts, what subconscious beliefs are lingering and driving them?

Those programs not only store our beliefs about ourselves and the world around us, but they drive a lot of our choices as a result of those beliefs.

Our thoughts, emotions, and beliefs drive a lot of the choices we make—like, a whole lot of them.

I thought I’d share some of the unconscious beliefs I had below the surface, because, I’m also beginning to notice that a lot of us have a lot of the same ones; and if any of this resonates with you, you may recognize some of them or it may give some things to think about it your own history.

I am darkness. I am worthless. I am a loser. This is more a general theme of beliefs, I suppose, and thankfully it’s been shifting a lot in the last few years. It does, however, still have some roots that I’m working on.

The takeaway point is that it doesn’t take big obvious childhood traumas to create these destructive “not good enough” beliefs.

Belief: I am unsafe. The world is unsafe. People are unsafe.

This one is still in there for me. It’s one of the more recent ones I’ve uncovered, so I haven’t completely cleared it yet. I frequently still feel it as a heavy ache in the center of my chest. It came mostly from having an abusive, alcoholic parent, although other things contributed to that one, as well.

Belief: Nobody cares what I have to say and even if someone does, I don’t say the right thing anyway.

This is one that I’ve fairly recently discovered, and it’s another one that came from what now seems like the silliest place. I used to hear, “Shhh, don’t say that! Little girls shouldn’t say things like that” and “Girls are meant to be seen and not heard” all the time from the adults around me when I was growing up. I mean, I probably said that to my own kid when she was little. It seems like such a normal, adult thing to say, yet it’s a message that affected me most of my life.

Belief: If I gain weight, I am worth less, I am a failure.

This one is unbelievably common because fat = bad is a message we’re programmed with from the time we’re little.

Those are a few examples to help you start thinking about some of yours.

I lived with and from those beliefs my entire life and had no idea they were even there.

What do I mean I lived from them? I mean, they drove the choices I made for myself.

Because that’s how it works.

Every belief that stemmed from the underlying, “I’m not worthy, I’m not good enough, I’m bad” theme prompted me to treat myself and my body accordingly.

Those beliefs fueled overly restrictive diets, starvation, over-exercise to the point of it being corporal punishment, but they also fueled the non-stop feeling of hunger. They fueled emotional eating, over-eating, and bingeing.

The more weight I’d gain, the more it would fuel those beliefs and the more I’d try to restrict to “be good” and “make up for it,” which would result in more bingeing. It was an endless cycle.

The other beliefs created uncomfortable feelings in my body that I not only wanted to avoid but learned to mistake for physical hunger. That’s why I was always hungry. I was always trying to numb everything I was feeling—and I didn’t even know it.

That gnawing, non-stop hunger feeling was never physical hunger. It was an aching hole in my chest that needed to be filled with feelings of safety and my own love and acceptance, but that I instead tried to fill with food simply because I didn’t know it. I didn’t recognize my own unwillingness to simply allow emotions to exist.

And the whole time, I thought I was just someone who had no self-control with potato chips.

Ha. Nope. That’s not it. And that’s the good news because once you recognize that, you can start doing something about it.

Food numbs and soothes. It just does. Constant hunger or “snacking” comes from a program in your brain running in the background that’s usually attached to the need to soothe or numb something uncomfortable—fear, pain, boredom, annoyance, etc.

It’s also reward and punishment. It took me years to realize that sometimes, I was feeling driven to eat, not because I was physically hungry but because I felt so worthless, I was actively trying to punish myself.

And the side effects of trying to control food intake tend to create more self-destructive habits of over-eating and bingeing (aka, feeling “hungry” all the time).

Constant hunger, feeling like there’s a hole that just can never be filled, isn’t physical hunger. That’s why it feels like it’s a need that’s never satisfied. It’s simply misinterpreting signals and responding with the wrong fix.

Something else I’ve learned: Our bodies are unbelievably smart. They don’t want to overeat to the point of being uncomfortably full; we’ve just unlearned how to connect with and listen to them.

Just pause for a second and check in with yourself. What do you really need right now? Is food the answer? (Because I know sometimes it can be hard to make yourself stop for a second when you get that urge to eat something, you can alternatively start practicing this while you’re eating)

Awareness and body-connection are where you start. From there, learning to recognize, manage, accept, and allow emotions makes a world of difference.

You don’t have to have all your unconscious beliefs uncovered and changed before you stop feeling hungry all the time.

Once you start recognizing when you’re being driven by your thoughts, beliefs, and emotions rather than physical hunger, and are better able to determine how to manage those emotions or when to just accept and allow them, the constant hunger begins to fade and things begin to shift.

Roni Davis is a coach, author, speaker & podcaster who helps women rebuild trust, compassion, and connection so they can heal their relationships with food, themselves and their bodies and live the healthy, peaceful, joy-filled lives they deserve. Find her at RoniDavis.com, on her podcast at It’s All In Your Head and don’t miss her information-packed free ebook: ronidavis.com/whydieatthat designed to help you begin uncovering your barriers to weight loss, healthy eating and why the heck you eat so self-destructively sometimes.

I Used to Be Hungry All the Time March 11th, 2020coachfelix